Inspired by a church service honoring mothers, Mrs. Sonora Louise Smart Dodd (1882-1978) wanted fathers to be similarly honored.  In particular, she wanted to honor her father, William Jackson Smart.  Smart raised Sonora and her five siblings alone after his wife died, during childbirth, when Sonora was 16.

In 1909, Dodd petitioned her minister and the Spokane Ministerial Association to honor fathers in a special church service.  Her diligence in promoting Father’s Day paid off a year later.  The first Father’s Day observances in Spokane took place on the third Sunday in June, the day Dodd had proposed.

Despite the auspicious beginning, it still took years and the intervention of several U.S. presidents to establish Father’s Day as a national holiday. (from the internet)

We appreciate fathers as a figure of stabilization and a role model to his children.  Children might hesitate initially to approach their father with a question or a problem but, once engaged will provide a real, honest reply, not sugar coated.

A child looks at the Father for appreciation and acceptance.  He is the inspiration that gives a child a goal to thrive to achieve.  Once the children need help, the father is by their side: guides, supports and help to solve the issue.

Happy Father’s Day to all Fathers!

The pictures below were taken in Frogner Park, Oslo, Norway the sculpture is Vigeland. 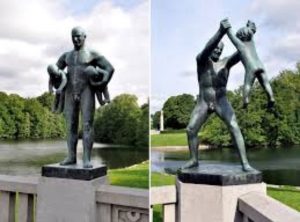