Neoroplasticity: The brain’s ability to recognize itself by forming new neural connections throughout life. It allows the neurons (nerve cells) in the brain to compensate for injury and disease and to adjust their activities in response to new situations or to changes in their environment.

Michael is a 79 y. o. Veteran who sustained Cervical Spinal Cord Injury which left him to become quadriplegic. He received PT and OT in a subacute facility and then moved to Paramus for long term care. He was initially evaluated by Jessica, OT on February 2,2018 with the goal of gentle passive stretching to retard progression of joint contractures and facilitate function; monitoring of splint tolerance: for contracture management utilizing a tenodesis, wrist cock up during day for functional hand use and grip splint for finger ext. at night; while on OT, emphasis on relaxation and proper positioning with yoga principles was done to promote joint approximation and enhance proprioception ; promoting sit to stand transfer using parallel bars: initially with Max. A x 3 for 20 seconds until he was able to tolerate 8 minutes in the parallel bars, and then progressing to the use of platform walker. Once he was able to tolerate standing for 5 minutes, PT (Ronit)joined the group to focus on Hamstrings and heel cords stretching, LE and postural muscle strengthening. He is now able to stand between parallel bars for up to 8 minutes with just CGA/Minimal A., which sometimes varies depending on muscle spasm (addressed by Nurses with medication) which we use to promote knee extension during stance. We intend to use Electrical Stim. machine, ultrasound and standing frame in his treatment plan. Electrical stimulation to further stimulate neural pathways and musculature and neuroplasticity in the brain. Ultrasound to address joint contractures and standing frame to further his stance and tolerance.

Michael needs extensive daily Nursing care before he can attend his Rehabilitation sessions 3x/week, which is provided by the wonderful Nurses and caregivers at the Veterans Home in Paramus.

The Veterans Home in Paramus has two Rehabilitation gyms, both equipped with appropriate equipment, where veterans are evaluated by skilled therapists to assess any impairment, limitations in motion and decline in   functional status. In these gyms ,Veterans are given individualized program to promote their quality of life after serving the country and reap their benefits for which they worked hard for. We promote highest functional abilities with least restrictive device, and retard onset or progression of impairments and soft tissue tightness to allow caregivers to perform their job with ease.

Let us introduce the wonderful team of Prime Rehabilitation Services at the Veterans Home in Paramus who work hard to give the well- deserved, best, individualized and quality Rehabilitation to our beloved Veterans! Nothing is better than working with team members who treat each other as friends and family. 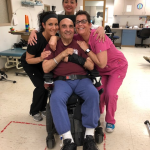 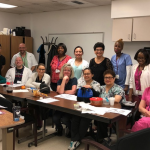