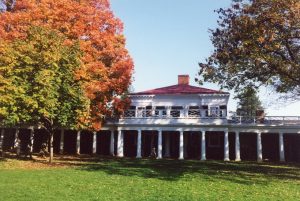 In 1978, we moved to Charlottesville, Virginia. We spent five years of our lives in this beautiful city, near the university campus, where we built our first house.  On weekends, we explored the Blue Ridge Mountains and its stunning waterfalls.  We loved climbing up to Humpback Rock and soaking up the views of the valley below us.  Years later, three of our four children attended UVA for undergraduate studies and would hike up to Humpback Rock after sports’ victories and to celebrate the end of semesters.

My first job experience in the USA:

I arrived at my interview for the position as a Physical Therapist at UVA’s hospital with a sleeveless casual summer dress and a sun hat.  Till this very day, I smile when I think back to how casual I was dressed.   In time, I learned to ask certain questions when invited to an event: What time should I arrive?  What should I wear? What should I bring? Can we bring children? 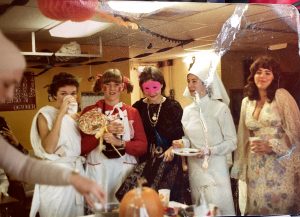 Halloween in the rehabilitation department

The work in the hospital was an educational and exciting introduction to American culture. In order to work in the USA, I had to get the appropriate work visa, take a TOFEL test for foreigners and a PT test for new graduates.

Even though I had 12 years of experience, I still had to study very hard for the test while raising my two children. I passed the test and was officially a PT in the USA.

It was one of the happiest days in my life. I then joined the rehabilitation team in the acute hospital where I increased my English vocabulary daily.  There was a coworker who laughed together with me at my English and at my misinterpretation of words, all in good fun.

My coworkers had a ball when they noticed that I had brought in a sandwich filled with chocolate spread, and I did not understand why. Everyone spreads chocolate on cakes, so why not on bread? Lucky for me, my supervisor was an English woman and she defended me, explaining that in England they had a thin layer chocolate specifically for sandwiches. The next Christmas I received beautifully wrapped a sandwich with chocolate spread, as part of my gift.

UVA had fully integrated their student body in 1972.  So when we arrived in Charlottesville, Blacks, women and Jews were only beginning to be accepted.  To be Jewish in Virginia at that time was difficult.

I had a patient that did not want a Jewish therapist to treat her, pointing to me, while making her wish known.

I had a supervisor that did not let me take the high holiday of Yom Kippur off.  I had to figure out someone to switch days with so that I could observe one of the holiest days of my religion.

This was the only downfall of living in Virginia for me.  Our three children who attended UVA years later did not feel the same antisemitism that I had felt all those years ago.

The therapy department at UVA’s hospital had a steady number of patients with cystic fibrosis. The patients would come every morning for chest therapy so that we could help loosen mucus from their airways by clapping with cupped hands on their chests.  It was the only way for them to survive the day. The therapists rotated the caseload consisting of patients with CF every two months, so we all formed relationships with those patients.  We understood that their life expectancy was up to 30 years old. We lost two brothers in the same month, ages 24 and 26.  The entire staff mourned their loss and the loss of every patient with CF that we had treated each morning. 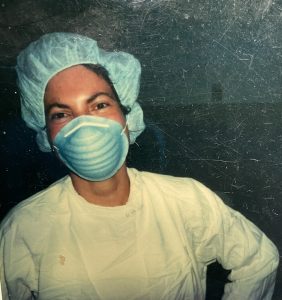 Working in an acute hospital

One winter, I worked with John, a patient with CF.  Since I had a twenty-minute walk in the snow to work each morning, I enjoyed warming up by working with John.  I clapped with cupped hands quite strong per his request to loosen the sputum.  One day, we had an argument about the width of paths in the forests. I wanted large paths so that families could walk and enjoy nature together.

He insisted that forest trails should be narrow so as not to disturb nature. The argument became heated and I was moving my hands strongly. When the session was over he said, “Yaffa, this was the best treatment because you became upset and clapped strongly.  I was able to clear a lot of mucus from my lungs.” Ever since then, I understood the importance of performing strong chest PT, so that the patient with CF could breathe easier throughout the day.  Today the patients put a wide vibrating belt around the chest – Hooray for progress.

Treating friends:  We became friends with a couple while living in Virginia.  She was a piano teacher and he was a professor at the university. She came to me one day with a complaint about the pain in her wrist.  The pain prevented her from playing and giving piano lessons to her students. During my evaluation, I did some light mobilization to the carpal joints, stretching the wrist to full extension and flexion and asked her to do the stretching three times a day, especially prior to lessons.

1970: A course in mobilization of the wrist

I asked my co-worker who played the piano to show me how to correctly prepare for playing. She explained to me that she stretched every finger and the wrist joint. Also, she practiced strengthening exercises for her fingers and wrists. And most importantly, she showed me how to use the weight of her forearm by letting it drop onto the keyboard to get the best notes.

Then I knew that I needed to pass on that guidance to my friend.  She needed to strengthen her arm, wrist and fingers in addition to stretching the joints, and she needed to learn how to use the weight of her arm to play the piano. We did the exercises twice together and she continued to do them regularly in her home.  Her pain lessened, her strength increased and she was able to continue playing the piano.

Upper back exercises:  Her husband was a professor at University of Virginia.  Teachers used to write on blackboards in the time before smart boards.  He shared that he had an enormous amount of pain in between his shoulder blades that prevented him from lifting his arm to write on the blackboard.

During my evaluation, I revealed that his shoulder girdle area including the elevators’ scapulae and rhomboid were very weak.  Instead of a bulk of muscle, there was an indentation between the scapula’s. I gave him an illustrated home exercise program consisting of holding his hands under his forehead and lifting up his head, shoulders, elbows and hands at the same time for a count of 5. Within a week, he told me that his pain lessened and he could hold that pose for 10 minutes.  He even used his time efficiently to read a book while in that pose.

These are the reasons why I loved to treat my friends. I learned so much from them, I helped them and they recovered quickly because they followed my instructions and consistently performed their exercises.

After a year in the acute hospital, I asked to transfer to the spinal cord injury unit and the story of my experience will follow in the next blog.