Reminiscences of a PT and Mother

I was pleased to have the following essay published in APTA Magazine’s April 2021 issue as “Defining Moment: An On-the-Nose Career.” (©2021 American Physical Therapy Association. All rights reserved. See the column on the APTA Magazine website.)

(The poster of a tiger saying “Trust me” was a gift in 1980 from a patient with balance deficits who often heard Liebermann say those words as she encouraged them to practice transfers.)

As a teenager growing up in Israel, I was grateful to my parents for supporting my desire to find a career that would help society. My mother explored the options in and around our village, looking for a profession that would honor my desire to serve and do something I’d enjoy.

During my senior year in high school, she connected me with a physical therapist student. As I listened with rapt attention to her description of her classes and her clinical experiences, and of the joys of helping patients recover from illness and injury through movement, I was hooked. It was a defining moment in my life, because I knew I was destined to become a PT.

I chose the school of physiotherapy at a hospital affiliated with Tel Aviv University. The 10-member admissions committee included PTs, nurses, and physicians. It was intimidating! But I forced myself to overcome my shyness and look into their eyes. One question they asked me was, “Why do you want to be a PT rather than a nurse?” My reply was, “A nurse must precisely follow the doctor’s orders. A PT has the prescription to treat but can use her training and judgment to tailor a plan of care to the patient’s individual needs and goals.”

To this day I don’t know where I found the courage to say that. When, decades later, I read the APTA House of Delegates’ position on autonomous physical therapist practice — stating in part that “Autonomous physical therapist practice is characterized by independent, self-determined professional judgment within one’s scope of practice, consistent with the profession’s Codes and Standards and in the patient’s/client’s best interest” — I thought to myself, with a bit of pride, “I grasped this concept even before I entered the profession!”

On my first day of PT school, one of my teachers said something that stuck with me: “If your patient leaves the session without having been challenged in such a way that he or she is tired, you have failed that session.” I’ve taken those words to heart throughout my career. It’s not a matter of no pain, no gain. Rather, while taking into account the needs and abilities of each individual patient, I’ve always pushed them, as appropriate, to do a little bit more than they may think is possible in that moment. When they’re successful, it builds their confidence along with their body.

As I began my career, each patient posed a new challenge for me: to evaluate him or her correctly, analyze my findings thoroughly, create an optimal plan of care, and then work together to ensure steady progress. It was a role that I cherished from the start. From the very beginning I loved treating patients. In fact, I fell in love with one of them — my husband of 50 years now, who was under my care when we both served in the Israeli army.

I thought about my patients night and day — ways that I might improve their treatment and accelerate their progress. I discussed my learning experiences around the dinner table with my husband and four children — of course, shielding the patients’ identities. One family experience in particular comes to mind as another defining moment in my physical therapy career.

Oren, our son, was 3 years old at the time. I was escorting him to prekindergarten. We were walking through a garden on steppingstones that were bordered by rocks with sharp edges. I was walking ahead of Oren with his twin sister when suddenly someone called out that my son had been injured. I turned around and I saw Oren with blood at the base of his nose. I cleaned his face and applied a small bandage. Later that day, Oren ran to play as if nothing had happened.

As a PT, though, I was concerned. The cut was minimal, but he’d fallen on a sharp stone, striking the intersection of facial bones: frontal, nasal, and frontal process of the maxilla and the lacrimal. I knew that his bones and skull were still developing. I didn’t voice my worries to anyone, but I remained watchful as my son grew over the course of the next several years.

By the age of 9, Oren’s nose was slightly upturned. It looked to me as if something held together the root of his nose, his forehead, and his eyes in a bit of a vise grip. I believed this was a result of the fall six years earlier. As a physical therapist and his mother, I needed to find a solution before considering surgery, while Oren was young and still growing.

I took courses in myofascial and craniosacral release. While they proved helpful with my patients — helping release tight back muscles, treat headaches, and release tension in the shoulder girdle — they didn’t help me with Oren. But when I attended a course, Muscle Energy Techniques To Correct Dysfunction of the Pelvic Region, taught by Sharon Giammatteo-Weiselfish, PT, PhD, I immediately knew I’d found someone who could help.

During a break in the course, I told her my son had fallen when he was 3, and that now, at age 9, it looked as if something was pinching the base of his nose. As I demonstrated on my own nose, she said, “He probably has an upper-jaw indent. His sternum likely is impacted as well. The falx cerebri is holding all the structures together tightly.”

I was stunned that someone could so deeply analyze the situation just from my description. I asked her to see Oren at her practice in Massachusetts. There, she conducted a comprehensive evaluation and sent me home with instructions on how to hold Oren’s head while conducting movement exercises.

I did as instructed. I applied muscle energy combined with craniosacral release. Oren was relaxed as I worked with him. It was easy to do. We repeated the procedure several times over the course of the next several weeks.

For some time after that I asked my son daily if he detected any change in his appearance, although I knew the process would be gradual and perhaps visually imperceptible He kept saying no and got tired of my asking. So I stopped. 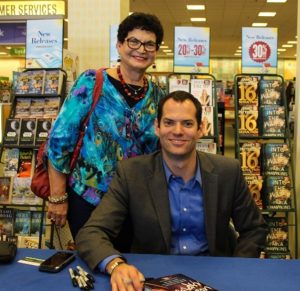 About a year later, though, I asked him again. To my great shock, my quiet 10-year-old child volunteered, “My nose has opened since those treatments, and I can breathe better now. I never have to breathe with my mouth open anymore.”

I’d never known that Oren was having difficulty breathing! My only concern had been aesthetics. In that that moment, though, I knew I’d not only prevented a possible surgery for my son, but I’d helped his nose grow to good composition and allowed him to breathe easier.

Oren is now a CNN Pentagon correspondent. He was diagnosed with Type 1 diabetes at age 31 while circling the world and wrote “The Insulin Express,” an inspiring book describing his travels while managing the disease.

This was testament to the power of physical therapy, and maternal validation of the wisdom of my decision to become a PT 53 years ago. Can there be a greater happiness?

Yaffa Liebermann, PT, is CEO of Prime Rehabilitation Services and Mobile Therapy Services, providing services in subacute nursing homes and in individuals’ homes in New Jersey. She is a board-certified clinical specialist in geriatric physical therapy and author of the books “Stroke Restoration: Functional Movements for Patients and Caregivers,” “I Stand Up Straight: Poems and Exercises,” and “Rachel, Pedro and Friends Stand up Straight: An Activity book.” You can reach her at yaffa@primerehab.com.

Posted in Daily Dose Of Inspiration!, Therapy Programs
← My Life As A Physical Therapist – Part 14A Special Thank You To Moms →