I’d like to tribute this Mother’s Day blog to all mothers, their children and life changing roles. 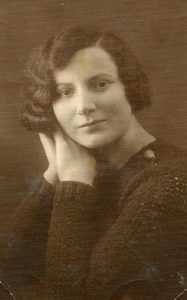 My wonderful mother, Rachel, was born and raised in Zedunska Vola, a village near Lodge Poland.

Her picture, from 1938, presents her inner beauty and peacefulness.

Rachel was a very dedicated student and got an award for attending school without missing a day.

Rachel added force to the family’s working hands by making wool and cheese to be sold in the market.

When Rachel ran out of options in her village, she moved to the big city, Lodge where she worked in a bakery.

Her brother Joseph wrote her letters from Israel to convince her to come to Israel.  Rachel traveled on a small boat with 700 hundred other people – the boat sunk in the Mediterranean Sea and they stayed the night on a rock before another boat picked them up.

Rachel was saved from the Holocaust and gas chambers but her family, who stayed behind, were not so lucky.

Rachel had a good sense of reality and took the right steps at the right time, and an ample supply of courage to venture into the unknown.

She met and married my father in Israel and gave birth to my brother and I. We lived in a long wooden house that provided a kitchen and one room to each family. The toilets and showers were in a different building.

One rainy night, the corner of our floor collapsed below my brother bed.  We lived there until I was 8 years old.  At that time in Israel we lived on food stamps. My father was very resourceful and  used a part of the yard to grow a vegetable garden and built a chicken coop.  We enjoyed playing outside, running and having a good time with our friends.

I remember my mother and I sitting daily on the cement porch and reading from a book.  I always had a nice white bow in my thick hair and always dressed well – same clothes, but cleaned, washed and ironed.

I grew up having a mother who loved me and supported me in which ever direction I wanted. When I reached 12th Grade and decisions about my future had to be made, my mother took me to talk with people to hear their opinions about their jobs. I learned that Physical Therapy would be the best profession for me.  We did not have much money but my parents provided me with what it took to study.

When my children were born, my mother was by my side to help me.  My mother re-learned how to raise little children together with me and I was able  to provide physical therapy at home while she attended to their needs twice a week.  My daughter Tamar loved my mother so much that she named her daughter Rachel.

We moved to Charlottesville, VA to further our education and my mother came to help during summer vacation. 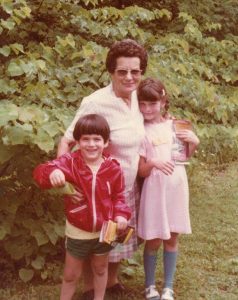 The picture from 1979 shows my mother with my two children by the library in Charlottesville. We moved to Israel and back to NJ.  My mother was present for every family celebration.

The roles in life reversed when my mother became dependent on me and my brother.

As years passed by and my father passed away,  I offered my mother to come and live with me but she refused and stayed in Israel. She went to independent living and we visited her three times a year but my brother lived 10 minutes walking distance from her.  His son used to go and conduct the morning Sabbath prayer in the facility she resided. 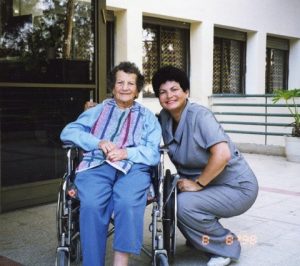 1998 August, Rachel and Yaffa, her daughter in Israel in a nursing home.

My mother suffered a stroke and became a resident of the nursing home section.

The picture in 1998 was taken in the facility. I visited a few times a year and called her often; the nursing staff treated her well and she was always dressed clean and smelled good.

She raised me with true compliments, love and support.  I tried to do the same for her when she become dependent.  This is the way the world turns around: We get from parents when we are young and we give when they become old.

The parents did what they thought is the best way to raise us and we treated them, as they grow older, the best way we could – They loved us and we love them.