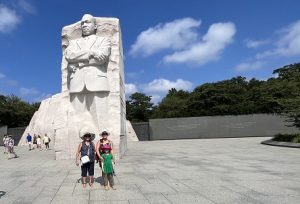 On August 28, 2022 we visited the following national monuments in Washington D.C.: the Lincoln memorial, the WWI and WWII memorials, the Korean, the Vietnamese and Martin Luther King Jr. Memorials.  Each one of them was impressive, dignified and respectful.  People quietly walked around and within, reading and contemplating the words on the walls and plaques. 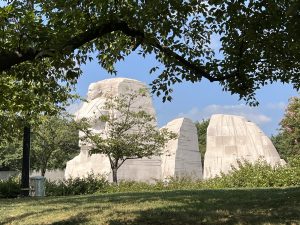 It was the 59th year since Martin Luther King JR.’s famous speech:  I have a dream;  since we did not visit the monument in the past, we paid tribute to it on this occasion.  We saw white huge stones from the road and I wondered what were they. We walked into the memorial and saw his great figure erected from stone with the engraving:

“Out of the mountain of despair, a stone of hope.”
From the “I Have A Dream” speech in Washington, DC on August 28, 1963. The quotation serves as the theme of the overall design of the memorial, which realizes the metaphorical mountain and stone. 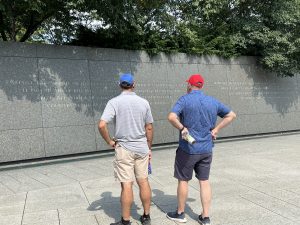 “We shall overcome because the arc of the moral universe is long, but it bends toward justice.”
Washington National Cathedral, March 31, 1968.

“I believe that unarmed truth and unconditional love will have the final word in reality. This is why right, temporarily defeated, is stronger than evil triumphant.”
Nobel Peace Prize acceptance speech, Oslo, Norway, 1964.

“Make a career of humanity. Commit yourself to the noble struggle for equal rights. You will make a better person of yourself, a greater nation of your country, and a finer world to live in.”
March for Integrated Schools, April 18, 1959.

“I oppose the war in Vietnam because I love America. I speak out against it not in anger but with anxiety and sorrow in my heart, and above all with a passionate desire to see our beloved country stand as a moral example of the world.”
Anti-War Conference, Los Angeles, California, February 26, 1967.

“If we are to have peace on earth, our loyalties must become ecumenical rather than sectional. Our loyalties must transcend our race, our tribe, our class, and our nation; and this means we must develop a world perspective.”
Christmas sermon, Atlanta, Georgia, 1967. 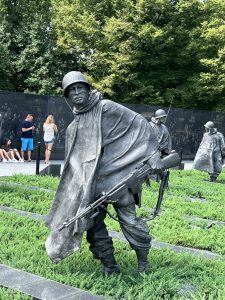 “Injustice anywhere is a threat to justice everywhere. We are caught in an inescapable network of mutuality, tied in a single garment of destiny. Whatever affects one directly, affects all indirectly.”
Letter from Birmingham, Alabama jail, April 16, 1963.

“I have the audacity to believe that peoples everywhere can have three meals a day for their bodies, education and culture for their minds, and dignity, equality, and freedom for their spirits.”
Nobel Peace Prize acceptance speech, Oslo, Norway, 1964

“It is not enough to say ‘We must not wage war.’ It is necessary to love peace and sacrifice for it. We must concentrate not merely on the negative expulsion of war, but the positive affirmation of peace.”
Anti-War Conference, Los Angeles, California, February 25, 1967.

“Every nation must now develop an overriding loyalty to mankind as a whole in order to preserve the best in their individual societies.”
New York City, April 4, 1967.

‘down like water, and righteousness like a mighty stream.'”
Montgomery, Alabama, December 5, 1955. Here, King borrows a verse from the Bible, the Book 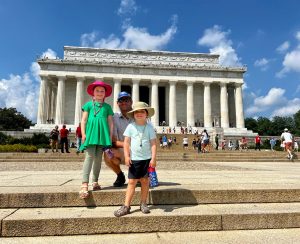 of Amos, which he frequently reused in speeches.

“We must come to see that the end we seek is a society at peace with itself, a society that can live with its conscience.”

“True peace is not merely the absence of tension; it is the presence of justice.”Stride Toward Freedom, 1958

Martin Luther King Jr. was a great leader for the short time he lived. His profound words will stay with us forever.

It was an honorable and inspiring day to walk in these monuments and read the words of our great leaders.

I highly recommended to visit the capitol of USA and visit the memorials of our past leaders. 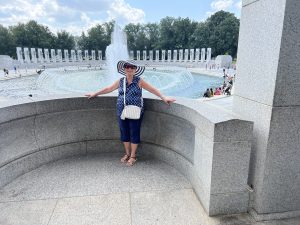 Posted in Daily Dose Of Inspiration!, Therapy Programs
← You Can Still Get Fit: Upper Body, Chest & TricepsWishing You a Healthy and Happy Jewish New Year →